Dominik Kadlubiak, an undergraduate at the Faculty of Medicine of Comenius University, won the university section of the Youth Embassy competition. He earned first place and received the Palm award for his project ‘Diseases of Civilization and Reduced Performance of Active People Due to Air Pollution’.

Dominik Kadlubiak designed the NOUS respirator that captures harmful air-born particles. The respirator is intended for athletes who need to train in cities. It is accompanied by a mobile app that tracks multiple biological variables.

Klaudia Barlíková from Comenius University won second place with her project of a geocaching app which aims to improve post-pandemic health, tourism and the economy. Third prize was awarded to Petra Minhulínová and Peter Ramaj from Matej Bel University (UMB) in Banská Bystrica for their project titled ‘UMB’s Economic and Environmental Links in the Context of University's Gradual Transition to Carbon-neutrality’.

The competition, organized by the Slovenka weekly, has been open to secondary school students for 12 years, and to university undergraduates for six years. The event was sponsored by the Chairman of the Slovak Parliament Boris Kollár and the Mayor of Bratislava - Old Town Zuzana Aufrichtová, who also appeared at the award ceremony to express support and appreciation of the students’ work. 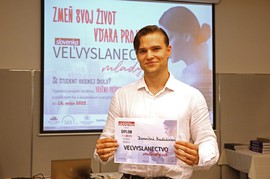 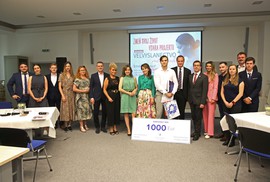