Bratislava, 18 May 2022: The biggest university in Slovakia will be led by the current Rector, Marek Števček, in his second term in office. He was re-elected at the meeting of the Academic Senate of Comenius University today, he received 48 out of 61 votes. The second candidate, Daniel Olejár, received 10 votes. Three members of the Senate abstained.

Marek Števček works at the Faculty of Law of Comenius University. He also studied philosophy, is the Head of the Department of Civil Law, for two years, he was Vice-Rector for Legislation, and has been the Rector of Comenius University since 2019. In the second term, he plans to focus on obtaining sufficient finances for the university and improving the image of higher education. 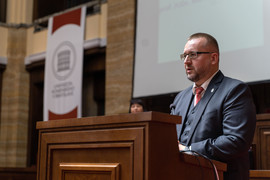