The subterranean passage under Bratislava’s Hodža square was named Underpass of 16 November 1989 Students on 1 June, 2021. The name refers to the 1989 protest march of Slovak students led by the students of Comenius University. Commemorating the first free elections of 9 June, 1990, alumni organized a celebration on 9 June, 2021 and placed a signboard in Hodža square.

The underground passage which connects the streets of Poštová, Panenská and Palisády under Hodža square became an important element of the students' protest march. The gathering began in Hodža square. The students then crossed the passage to SNP square, passed in front of Comenius University on Šafárik square and finally arrived in front of the Ministry of Education which was then on Dobrovič street. The demonstration demanded respect for human rights, release of political prisoners and more freedom and democracy. The students chanted slogans like: Freedom of speech! We want school reforms! or Democracy, democracy!

The new name of the subterranean passage refers to a historical event during which students of Bratislava’s schools actively contributed to a social change, which eventually led to free elections.

Watch a recording of the students’ demonstration which took place on 16 November, 1989 (YouTube) 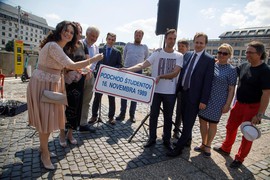 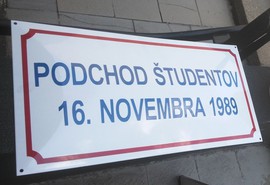