Mlynská dolina has its own novel

In many respects, the Mlyny campus is one of a kind in Slovakia. This year, it acquired yet another unique trait - it got its own novel. Matúš Mahút's book Kvapky (Droplets), published this summer, takes place entirely at Mlyny. In the book, we follow the life of freshman Mirko, who arrives from Orava, checks in at Atrium Houses, room T81, and little by little discovers the rules governing a university student's existence in Mlynská dolina. Its author Matúš Mahút, a recent graduate of Comenius University and of the "school of life" in Mlynská dolina, told Our University about the origins of his book, about how much of its story is true and how much it reflects the issues faced by students today.

Why did you decide to set your novel in the Mlyny Dormitories?

I felt the need to create a record of my five years at the university. They were very colourful, full of experiences, some funny moments and some difficult moments. I wanted to give them a summary form, to create my own mini-memoir. I wrote "Droplets” in my dorm room, T 81, in the Atrium Houses.

Who did you imagine as the reader of your book?

Every student who sits destitute and sad on the bus no. 31, gets off, has a cheap soup in Venza or Eat, collapses on the bed of the dorm room and wants to recharge a little with joy. That's why the cover of the book is cheerful and I hope the text is too.

"Droplets” begins as a story full of innocent, joyful and absurd stories of two friends, Mirko and Samko, who are looking for friendship and love on the campus. Gradually, however, the story receives a darker tint, and more serious topics are addressed. Was your goal to point out the problems that students will encounter at Mlyny?

Yes, it was my intention to gradually darken the plot. I wanted the book to serve as a manual for college life, and I wanted to describe the brighter moments, but also the darker aspects. To show that students are not always happy, that they also deal with depressing problems and sometimes, unfortunately, they opt to use illegal substances as a way out.

Is it a warning to aspiring students, not to be too naive?

Partly, yes. I wanted to do it like some professors who, at the very beginning of their lectures, unload on the students everything they will have to master and fulfil. I also wanted the students to know right from the start what awaits them in dorm life, what they are getting into, so they don’t leave after a month. But it is also an invitation to study at a university, specifically Comenius University, and to stay at Mlyny. There are adventures to be had there.

What do you think are the priorities of today’s students?

The first priority is themselves. They search for themselves, they seek their own self. Relationships are the second priority - they arrive in a new environment, from all corners of Slovakia. I think their study only comes third, and I think that's right. Because those who put school first will not experience what they should experience during their five years at university. Money is also a priority – it’s a pretty essential commodity that accompanies university life.

There are many stories in the book, some of which are quite incredible, for example, when students act as security guards or the "pop out for a kebab". How many of them really happened and how many are products of your imagination?

Any event like that could happen, because Mlynská dolina is the birthplace of bizarre situations. Some really happened, for example the "pop out for a kebab" one. But it's still just a novel.

In the book, you also point out things that don't work, or that work, but are not legal. Is this your message to the management of the Dorms to begin addressing these shortcomings?

The Mlyny campus has its charms, although in many ways it looks exactly as it did fifty years ago. A student is a creature that becomes accustomed to anything, but I think it would be nice to create an environment for students where they would feel both safe and comfortable. As for the character in the novel who engages in not-quite-legal activities, that’s just a vehicle to dramatize the plot.

How do readers respond so far?

I've had feedback mainly from friends, and it's generally positive, they say it's a ‘page-turner’. My dorm roommates are trying to find themselves in the book, and I think each of them will discover a part of what we went through together.

While reading 'Droplets’ one feels that you’re fairly well-read for a starting author. Who were your literary role models?

I studied English and Slovak literature, and my favourites are, for example, Jack London, F.S. Fitzgerald, who describes a hedonistic life, but also Martin Kukučín, who focuses attention on the ordinary person. I also like Dostoyevsky and his treatment of the inner world of the characters. But I think I have created something new because no other literary work takes place at Mlynská dolina.

Your book is written in a specific language which is modern, with a lot of words loaned from English that are sometimes literally transcribed into Slovak (for example, 'ajsik' for ISIC), but often whole sentences and quotes remain in English. Did you have to struggle with the editors when publishing the book?

No, they mostly respected that it was my writing style. What they provided was rather "maternal guidance" to make sure the text flowed properly.

The names of all the main characters are in diminutives - Mirko, Samko, Majka, Hanka. Why did you choose to do it this way?

That way, I came to like them more easily. Their actions are not always positive, but I still tried to see some good in them. When they did something less than admirable, it allowed me to use the non-diminutive form to highlight that fact in the story. And I also think that the main character, Mirko, would use diminutives to call his friends.

You never reveal what Mirko is studying.

I saved that for the next book, where it will be revealed, but I don't think it's too important.

So ‘Droplets’ will have a sequel?

Yes, there were a lot of memories and they are and will be accumulating, because life has started at Mlyny again after the pandemic. I have already finished the second volume entitled Dážď (Rain) and I am working on the third - Búrka (Storm). The heroes remain, but they advance through the university and acquire new experiences. I am glad that through them, I'm experiencing the dorm life again. 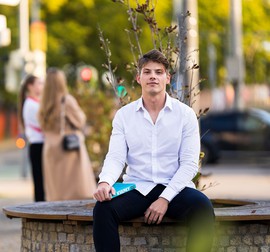 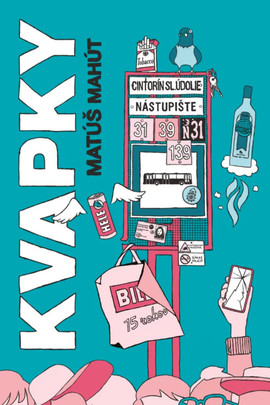