Bratislava, 7 July 2021: Students of the Children's Comenius University returned to CU’s Auditorium. The summer school was fully online last year but this year it takes place in a combined format: both on-site and online. Ivan Korčok, the Minister of Foreign and European Affairs of the Slovak Republic, was this year's opening speaker.

Children aged 9 to 14 who will attend Children's Comenius University (CCU) in person have had their matriculation ceremony in the auditorium today. In this ceremony, they take the Academic Oath and officially become students just like regular university students do.

The CU Rector, Marek Števček, had words of encouragement for the new learners. "You are embarking on a voyage towards knowledge today, and perhaps at the very end of it you will understand that the only thing you really need to explore is yourself. I will be extremely happy and very proud of you if the Children's Comenius University helps you in that," he said.

The author of the idea and the founder of CCU, an actor, Juraj Kukura, particularly thanked the parents: "I am grateful to them for accepting this decision of yours - to continue studying during the summer and to get further than others. I congratulate you on your decision, which will mean that when you return to your school desks you will be one step ahead of your classmates," added the director of the Aréna Theatre.

The Minister of Defence, Jaroslav Naď, also took part. "This country needs impact players. This country needs people who want to do more. In English-speaking countries, they say ‘go the extra mile’. Do a little more than others. Like, for example, spend the summer at a prestigious university. Education is the future," he said.

The opening lecture of the 19th annual summer school was presented by the Slovak Minister of Foreign and European Affairs, Ivan Korčok, on the topic of "Why it pays to be a diplomat in real life?" He explained to the students that even though people may have different opinions on the same subject, they should still be able to accept the other's opinion and behave like diplomats. "Have your own opinion," the minister concluded. 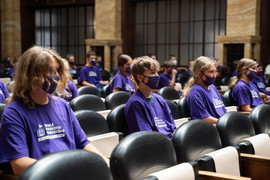 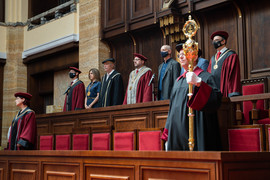 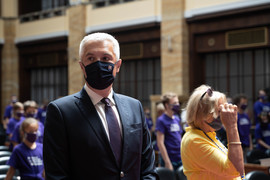