They discussed the topics of accreditations, the current financial issues, and the amendment of the Higher Education Act. Some questions were also related to the Act, like the rector's relationship with deans or the new status of the Board of Trustees. The candidates also expressed their opinions on the support of sports at the university or the support of student associations. They also expressed their opinion on what role Comenius University Bratislava should play in our society.

The amended Higher Education Act changes the way in which faculty deans are appointed. Both candidates are in favour of continuing to have the deans elected by election assemblies composed of the faculties’ academic senate members.

"The faculty and the academic community know the people better, and I’m in favour of leaving the election of the dean to the academic community and its representatives in the senate," said Daniel Olejár, adding that if he were elected rector, he would just require some means of controlling their activities. "Information systems allow us to learn much about the activities of faculties and identify problems in time," he added. In his opinion, the rector needs to have an intensive personal relationship with the deans and should only intervene when problems surpass the deans' authority.

As rector, Marek Števček would promote the adoption of such provisions in the University’s statute and other regulations, which maximize academic self-government. "The election of a dean is the essence of the academic community’s voice. If the academic senate elects the dean, the voice of the students is also heard better," he says. According to him, the rector's relationship with the deans should continue to be based mainly on collegiality and respect.

According to Marek Števček, in order to guarantee the future role of Comenius University in the society, it is crucial to explain that we offer a product which is impossible to quantify precisely. "Our product is the person that the University is building, who is capable of critical thinking, respects the law and upholds values, and is capable of navigating the information maze," he thinks. "Universities are not here to support the industry which is in the vogue now, which the current government points to. Universities should focus on education, upbringing and cutting-edge research," said Števček.

According to Daniel Olejár, the society is complex and evolves so fast that state institutions are unable to predict what will happen. "Our experience is that if we have people capable of solving major issues, we have a chance to elect them into the bodies which develop solutions," he said. "I see the university's role in helping state institutions seek solutions which they are unable to produce themselves. Firstly, by trying to focus on the future, and then following the developments, as top universities do,” thinks Olejár.

Daniel Olejár works at FMPI where he used to be the head of the department of informatics and then served as the Vice-rector of Comenius University for information technologies for six years. He has also worked for public administration and the private sector. His main goal as rector would be to help the university cope with the changes associated with the ongoing fourth industrial revolution, digitization, and the advent of artificial intelligence.

Marek Števček works at the Faculty of Law and he also studied philosophy. He is the head of the Department of Civil Law and served as vice-rector for two years. Since 2019 he has been the Rector of the University. If re-elected, it plans to focus on securing sufficient funding for the university and raising the profile of higher education. 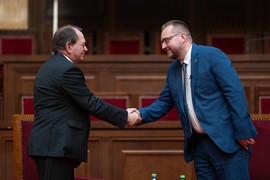 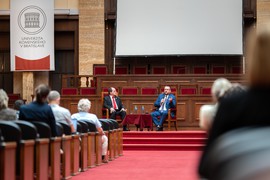