Through the ENLIGHT superuniversity, the largest Slovak university now has a new strategic partner for cooperation. The University of Bern is an excellent university and one of the best in Switzerland. In international rankings it regularly ranks around the 100th place. Approximately 19,500 students study at its eight faculties which offer state-of-the-art facilities.

Swiss universities are fighting to retain their connections to European networks. They do so under difficult conditions since Switzerland was excluded from Horizon Europe and Erasmus+. This year, however, Swiss universities were given the opportunity to join European University alliances as "associated partners".

ENLIGHT is an alliance of European universities and consists of 9 renowned research-intensive universities located in Ghent (Belgium), Tartu (Estonia), Bordeaux (France), Göttingen (Germany), Galway (Ireland), Groningen (the Netherlands), Uppsala (Sweden), Bratislava (Slovakia) and the Basque Country (Spain). On 1 December 2022, the University of Bern was elected as associated member by the ENLIGHT Governing Board.

ENLIGHT offers mobility and education among its member universities. They offer a wide range of exchange opportunities and support transdisciplinary education in order to prepare students for the challenges of a connected world. “Even though our researchers still urgently need Switzerland's association to Horizon Europe, to be part of the most important research network in the world, joining ENLIGHT is an important step for us to retain our connections in Europe and promote exchanges as well as cooperation," says Christian Leumann, Rector of the University of Bern.

The ENLIGHT universities cooperate closely in areas where the University of Bern can contribute actively, such as health, climate change, digitization or renewable energy. 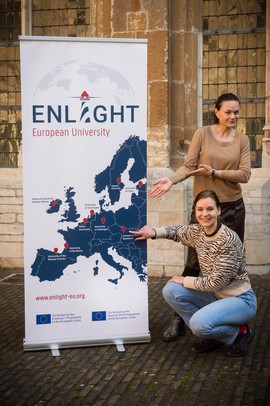