Physical medicine and rehabilitation have long been Helmut Kern’s area of expertise, in which he carries out research and develops new methods of rehabilitation. In the field of rehabilitation, he applies progressive principles of sports training. He studied medicine and sports science at the University of Vienna. He has more than 7000 citations and an H-index of 44.

In cooperation with the Faculty of Physical Education and Sport of Comenius University, he developed several original diagnostic and training devices. Together they also designed and verified exercise programs for both healthy and weakened individuals. The activities of the team led by Professor Helmut Kern and Professor Dušan Hamar from Comenius University led to the establishment of the Centre of Active Ageing, a unique facility which translates research into practice.

„I am proud of the many years of scientific cooperation and joint research in the field of sport sciences, physiotherapy and rehabilitation,“ said Professor Kern at the award ceremony about his cooperation with Professor Hamar's team from Comenius University.

Comenius University Bratislava awards the honorary title of Doctor honoris causa to important figures of domestic and international life who significantly contributed to advances in education, science, culture, democracy or universal human values, and have personally played a part in the progress of the human civilization by propagating learning and humanism. So far the title was awarded to, among others, the former German Chancellor Angela Merkel (2014), UN Secretary General Ban Ki-moon (2015), internationally renowned microbiologist Ján Vilček (2014) and the 14th Dalai Lama and Nobel Peace Prize laureate Tenzin Gyatso (2000). 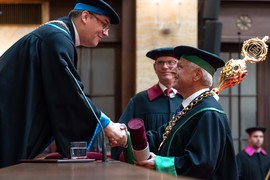 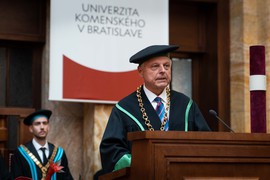