In his lecture, the reporter for The New York Times will focus on politically motivated attacks against journalists, and other dangers which threaten the free media. Matt Apuzzo has personally had his phone data seized by both the Obama and the Trump administrations. In his opinion, such intrusion into the work of journalists can threaten the freedom of the media and the very essence of democracy.

Matt Apuzzo is an international correspondent of The New York Times and an investigative reporter stationed in Brussels. He focuses on issues related to law enforcement, national security and intelligence services. For several years, he worked for the Associated Press, he also taught journalism at Georgetown University, and together with Adam Goldman he co-authored the book Enemies Within which describes the secret spying units operating in Islamic terrorist networks. He received his first Pulitzer Prize in 2012 for his report on the spying tactics employed by the New York Police Department against the Muslim community. In 2018, he received the prize for his articles describing the Russian influence on Donald Trump's election campaign and finally, this year, he was on the team of authors who received the prize for their coverage of the development and consequences of the coronavirus pandemic.

Admission to the lecture is free but registration is necessary at www.uniba.sk/apuzzo. Following the recommendation of the public health officers the event will be for “Completely Vaccinated Only”. Interpreting into Slovak will be provided and the lecture will be streamed live at www.nadaciatatrabanky.sk/apuzzo.

The appearance of the American journalist is a part of the Pulitzer Prize Lecture Series supported by Tatra Banka Foundation in cooperation with the Petit Academy Foundation and Comenius University Bratislava.

"We believe that only wise and educated people can cultivate our society. That is why Tatra Banka Foundation focuses on the arts, education and digital innovation. It has been our long-term goal to help improve the level of education in Slovakia. We have therefore been enabling inspiring lectures by acclaimed laureates of the Nobel Prize and the Pulitzer Prize for over ten years. It is a great honour to have our invitation accepted by three-time Pulitzer Prize winner Matt Apuzzo this year. His lecture, Through Real Threats to Real News, discusses a highly relevant topic and I hope it will be very interesting to a broader audience," said Michal Liday, Chairman of the Tatra Banka Foundation Board.

"Matt Apuzzo is visiting Slovakia at a time when many people receive information from unverified sources, and politicians regularly attack journalists. Through his personal experience, he shows that independent and credible reporting is also under threat in the United States. He helps us understand that the weakening of the media is one of the first steps taken by those who are out to grab unlimited power," reacts Ján Pallo, Administrator of the Petit Academy Foundation.

"The growing disrespect for information based on science and facts can be countered by top-notch independent journalism. I appreciate the fact that Comenius University will welcome Matt Apuzzo, reporter and three-time winner of the prestigious Pulitzer Prize, who often faced danger, but never gave up. His work is proof that first-rate, honest reporting can improve the world," says Marek Števček, the Rector of Comenius University Bratislava. 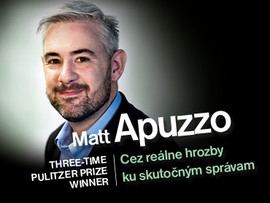