ŠTEFÁNIK IS COMPARED TO A FALLING STAR

He was a scientist, traveller, collector, soldier, aviator, politician, diplomat, and appreciator of life and its beauty: be it female, exotic, or cultural. He was not satisfied with being average in any sphere. On the contrary, he strived to excel, and often managed to do so, thanks to his relentless diligence and sense of purpose. On 4 May one hundred years ago, one of the greatest personalities of Slovak history – Milan Rastislav Štefánik – died before his time.

Over fewer than 39 years, and practically only over two active decades, he radiated light, energy, and charisma to such an extent that he managed to do more in this short time than other people manage over much longer lives. This is why Štefánik is compared to a falling star.

“Even before the First World War he had achieved more than enough. Above all, he convinced himself and others that everything could be accomplished if one walked steadfastly toward their goal. His stellar years came during the war, which saw him involved in high politics and deciding on the fate of soldiers, countries, and nations,” says Roman Holec, a historian from Comenius University. This small man from Košariská helped defeat Germany, smash the Habsburg monarchy, and fight against emerging Bolshevism. Above all, Štefánik played a decisive role in creating a brand-new state upon which today's Slovak Republic is based.

Moreover, no manual for such activities existed; everything was done on the go and without any experience. “It is no wonder that the results achieved have acquired a fairytale-like character. Individual protagonists have been identified as beings with the most miraculous qualities. This was all the agenda of an extraordinary yet small and actually quite ill man who was bearing a huge weight on his shoulders,” says Roman Holec.

Štefánik's tragic death seemed to symbolize the falling star's impact on the ground. Figuratively speaking, he left behind a crater of unprecedented proportions and a “heritage” which we have been assessing even now. Death came unexpectedly early, and Štefánik departed (in contrast to Beneš, for example) into history with his head raised. He remains a model for lively generations and for those living much longer. 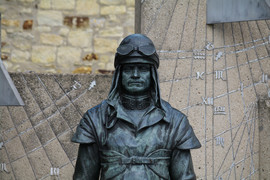 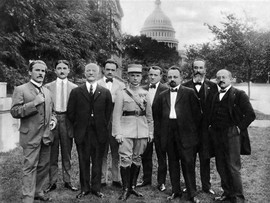 Štefánik with Czech and Slovak colleagues in Washington in 1917. Source: Wikimedia.org