On the occasion of its 100th anniversary, Comenius University recognize the President of the Constitutional Court of the Czech Republic, Pavel Rychetsky

Bratislava, 20 June 2019: The celebrations of Comenius University in Bratislava's 100th anniversary as Slovakia's first and largest university will culminate on 26 and 27 June. At a ceremonial academic gathering on 27 June in the Comenius University Auditorium, the university's rector, Marek Števček, will award the Grand Gold Medal of Comenius University, which is the university's highest award, to the President of the Constitutional Court of the Czech Republic and Charter 77 signatory Pavel Rychetský. According to the rector, Rychetský is an embodiment of personal and moral integrity and a man who has stood up for the development of democracy, legal studies, and the rule of law.

An invitation to participate in these main university celebrations was accepted by the President of the Slovak Republic, Zuzana Čaputová, as well as the representatives of major Czech universities. The celebrations will begin with the opening of an exhibition entitled "The First Lady of Education" at Bratislava's City Museum. In cooperation with the National Bank of Slovakia, there will be a presentation of a commemorative silver coin, and in partnership with Slovenská pošta there will be a presentation of a special postage stamp commemorating this important milestone in Slovak higher education. The celebrations will culminate in a gala evening at the Slovak Philharmonic, where a symphonic piece by the Slovak composer Marián Lejava, which has been especially composed for the anniversary, will be performed along with Antonín Dvořák's symphony "From the New World". 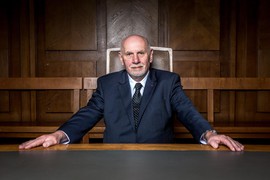