High school students get the opportunity to spend a day, as university students

Bratislava, 16 May 2019: Over the two weeks that some high school students are sitting their school leaving exams, their younger schoolmates will be able to spend a day attending lectures at Comenius University in Bratislava. Experts from different areas will present them with interesting academic topics in an engaging form for the fourth year at the Spend a Day as a University Student event. Young people from Bratislava and the wider region will be able to see whether they want to study at university during the event, which is held in the main building of the university on Šafárik Square from 20 to 28 May 2019.

“This year we are once again thinking of high school students who are planning to decide on their future direction. I am pleased that our experts have offered such interesting topics as these students' older classmates will be graduating. I believe that every participant will be attracted by at least one of the topics which will inspire them to choose their future study discipline and ideally their profession,” said the Comenius University rector, Marek Števček.

On Monday 20 May, visitors will learn about things such as why the Greeks yearned for bliss, what conspiracy theorists could learn from scientists (and vice versa), and why medicines can also be harmful. Attention will also be paid to Facebook, space debris, aliens, and good teachers and good people.

What is Generation Z: a generation lost or a generation of the future? This will be on the agenda a week later on Tuesday 28 May. Why the personal car has become so important to us, how success is measured, and why being “enterprising” is not a curse but rather a compliment are among the twelve topics that experts from Comenius University want to present to secondary school students. 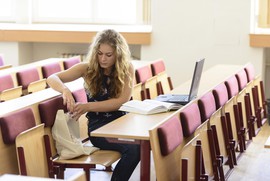