COMENIUS UNIVERSITY HAS DECIDED UPON THE REVITALIZATION OF THE DORMITORIES

Ľudovít Štúr Campus-Mlyny will experience its most extensive renovation. Approximately €1.3 million is being invested there in state-supported funding. The university is planning to repair the heat exchanger, regulate the heating system on all blocks, and renew the elevator shafts and lifts in the Marriage Dormitory and the "A" Elevated Block. Also, the roofs will be repaired on selected blocks of the Atrium Houses, which are almost in a state of disrepair, and the air conditioning in the Venza cafeteria will be replaced. Ľudovít Štúr Campus-Mlyny plans to implement all of these activities by the end of 2019. From next year, students can look forward to several changes and modifications. Ľudovít Štúr Campus-Mlyny has earmarked more than €600,000 from its own resources to replace most of the bedding and partitions in the Atrium Houses, create relaxation areas, make the entrance areas in the Elevated Block and Marriage Dormitory vestibules more attractive, and create and establish a multifunctional social room on the premises of the Šturák dormitory which will serve as a venue for various discussions and educational events run by student clubs. The biggest challenge in the second and third quarters of 2020 will be the complete reconstruction of the “B” Elevated Block of what is the largest Slovak university dormitory. This investment will amount to more than €14 million.

At Družba (VI) the university is planning renovation work involving the replacement and repair of windows, balcony walls, radiators in rooms, beds, electrical mains, the lighting distribution in corridors in dormitory areas, and the repair of roofs on the D1 and D2 buildings. This month will see the commencement of the renovation of the cafeteria, which will take approximately one year. The total investment for these activities is approximately €1.5 million.

“After having uncovered shortcomings in the project documentation, I made a significant change in personnel, and since then we have worked intensively on the renovation plans. We can no longer postpone this process. However, it is important for us to maintain the students’ living comfort when undertaking such a big operation. We will do everything we can to ensure that the money we have received for the renovation of the dormitories is used efficiently and in an expedient manner, and that we increase the living comfort of students,” said the rector of Comenius University, Marek Števček.

The previous major renovation, costing more than €4 million, ended in 2015, when the university opened the newly renovated Marriage Dormitories in Mlynská dolina to accommodate 570 people. 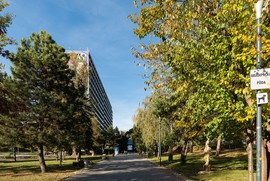