The Dalai Lama at Comenius University: The 21st century should be a century of dialogue

Bratislava, 16 October 2016: “The 21st century should be a century of dialogue.” This was one of many messages to come out of the visit by the 14th Dalai Lama, Tenzin Gyatso, who is an honorary doctor of Comenius University, and his meeting with the academic community on Sunday 16 October 2016 in the Moyzes Hall at the Faculty of Arts.

This very special guest was welcomed to the university by Comenius University Rector, Professor Karol Mičieta, who said: “Exactly sixteen years ago, on 16 October, our alma mater awarded the Dalai Lama with an honorary doctorate. Today we welcome His Holiness to Slovakia for the third time, and as we say in Slovakia, this is indeed a case of being ‘lucky three times over’”.

The Vice-Dean of Comenius University’s Faculty of Arts and renowned Sinologist, Professor Martin Slobodník, told the audience the Dalai Lama’s life story: “According to Tibetan Buddhism, Tenzin Gyatso is the 14th reincarnation of the Dalai Lama, whose origins stretch back to the 15th century.”

“I am very happy to be able to meet here with the academic community. It is a great honour for me, and I thank you for this opportunity,” said the Dalai Lama as an introduction. The event, centred on the theme of Moral Aspects of Education and Science for the Benefit of Humanity, took place in an atmosphere of realizing the need to respect others, unity, and solidarity. “Humanity needs to know how to feel sympathy,” said the Dalai Lama, who stated that people needed to learn to empathize with others. The Dalai Lama also described his concept of forgiving but not forgetting.

In discussion with the audience, the Dalai Lama reacted to questions on how education can contribute to the development of humanity and global social change, and on the current problems the world is facing. The spiritual leader of Tibet emphasized that empathy needs to be learnt during the educational process itself.

The Dalai Lama also looked at an exhibition of photographs in the Moyzes Hall which dealt with north-eastern Tibet and which captured instances of Tibetan culture and religious life. The photographer was Pavol Breier from Comenius University’s Faculty of Education. Breier’s photographs are included in the book Labrang - svet tibetského kláštora (Labrang: The World of the Tibetan Monastery), which is authored by Professor Slobodník.

The event was concluded with the Comenius University Rector awarding the Dalai Lama with a university commemorative ring. The Dalai Lama respected this gesture by placing the ring on his finger in front of the audience.

***
The 14th Dalai Lama, Tenzin Gyatso, is the spiritual leader of Tibet. He was born as Lhamo Thondup on 6 July 1935 in a village in north-eastern Tibet. His enthronement ceremony as the Dalai Lama was held in Lhasa, the capital of Tibet, on 22 February 1940. Tenzin Gyatso has been awarded a number of peace prizes and honorary doctorates. In December 1989 he was awarded the Nobel Peace Prize. On 16 October 2000 he received an honorary doctorate from Comenius University in the university’s Auditorium for “his contribution to spreading noble wisdom, peace, and humanism around the world; his many efforts in gaining dignity for the individual and oppressed peoples, while also maintaining a channel of understanding between nations; and his work in the area of moral philosophy, with which it is possible to face the bad moral chaos of our times." 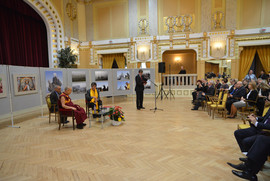 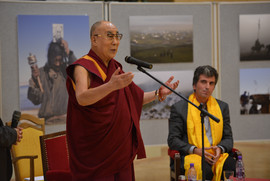 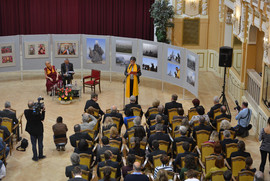 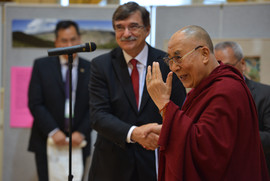