In the future, knowledge will be an obsolete idea

Professor Sugata Mitra from India is a world-renowned visionary in the field of education and technology. This is not only because of his TED talks on this subject or because his work inspired Vikas Swarup for his novel Q & A, which the film Slumdog Millionaire is based on. His ideas are more than thought-provoking results of academic theorization; they are supported by evidence which should be taken into consideration by every teacher who really wants to prepare their students for the future and help them be happy, healthy, and productive. This is one of the biggest tasks of Mitra’s alternative to the current education system. It was an honour for our university magazine that Professor Mitra was willing to answer a few questions.

Beyond the hole in the wall

In 1999 Sugata Mitra conceived an interesting experiment. He went to a slum in Delhi and installed a computer into a public wall in the manner of a cash machine. Kids gathered around within a matter of hours and asked Mitra questions what this thing was. He responded by saying “I don't know” and walked away. He left them with no teachers and no instructions, only with access to the world’s living library: the Internet. As he expected, the local children began to experiment. But what he had not expected was how quickly the kids would overcome language barriers and educational gaps and master the basics of computing and begin to search the Internet for new areas of study. As he observed the group, he identified one reason behind their success: they were co-operating, reading in groups, and solving problems together.

Mitra repeated the experiment 300 miles away, where computers were even less common. A few months later, he returned and found kids playing games on it. Mira remembers: “They said they wanted a faster processor and a better mouse.” Another thing these kids said was music to his ears: “You gave us a machine that works only in English, so we had to teach ourselves English.”

A school in the cloud

Mitra called his “hole-in-the-wall” computers self-organized learning environments (SOLEs) and went on to set up many others around the world. To bring in a little direction and encouragement while maintaining the self-sufficiency of the SOLE system, he recruited an army of volunteers who would dial in on Skype to encourage the children. This army of altruistic Skypers is known as “the granny cloud”, partly because many of them are retired teachers and their job is to pose interesting questions and praise the children on their findings.

Mitra’s innovative and bold efforts towards advancing learning for children all over the world earned him the first ever $1m TED Prize in 2013. Mitra asked the global TED community to make his dream a reality by helping him build the ultimate School in the Cloud where children, no matter how rich or poor they were, could engage and connect with information and mentoring online. Shortly after that, the first School in the Cloud lab – located inside a high school in Killingworth, England – opened its doors to students. Seven more labs have since been opened as part of his wish: five in India, one more in the UK, and one in New York. The labs aim to provide an environment where a global community of educators can observe the impact of self-organized learning on children from a wide range of educational backgrounds.

We are moving into an era of learning

“It’s quite fashionable to say the current education system is broken. It’s not; it’s actually wonderfully constructed. It’s just that we don’t need it anymore. It’s outdated. In the future, knowing something will be an obsolete idea. Once we get past knowing, we move into an era of learning.That is why education should be about developing the ability to learn anything on one’s own,” Professor Mitra says. He claims that the teacher as the sole knowledge-transmitter is a model that is no longer viable. It is important that teachers learn to let go of the control they have over how lessons should take place and allow their students more autonomy, because increased learner autonomy leads to motivation.

Moreover, children should be given free access to broadband Internet, large screens for group access, a safe environment, and stimulating questions. “It should be their fundamental right to get these things as much as food, shelter, clothing, and healthcare,” Professor Mitra says.

You sweep aside all established thinking about education. For example, you claim that even the status of reading, writing, and arithmetic as fundamental skills must be questioned and that we should reassess the definition of present-day (il)literacy. So in your opinion, what are the key skills that should be developed in children at future schools and why?

The key skills needed today are: comprehension – the ability to read, watch, hear, see, sense or feel the meaning of something; communication – the ability to write, show, act, speak, record, compose (e.g., text, audio, and video), and indicate through facial expression; and computing – the ability to search for and find information, data, and opinions, solve problems using the Internet, use computing devices to do tasks, and detect incorrect, fraudulent, or inappropriate material and block or avoid it. Children with these skills can negotiate life as they go along. They know how to learn and solve problems “just in time” instead of memorizing things “just in case”.

What do you think the role of the teacher is?

Could you give me an example how big questions work?

Suppose a teacher wants to deal with “The Roman Empire” as a topic. Show the learners a map of Italy, zoom in on Rome, and zoom in on the Colosseum. Ask “What is that building and why is it broken?” Depending on the answers, frame the next question, and so on.

“We still need teachers, but they need to learn to let things happen. Letting it happen will dominate over making it happen. The difference that I am talking about is like the difference between an architect and a gardener. Both of them build things. The architect makes the building and he knows exactly what he is going to do. The gardener plants the trees and does all the right things to cultivate a beautiful tree, but he has no idea of what the tree will look like except that it will be healthy and it will be beautiful.”

You say that students can take control of their own education and, more importantly, that they probably have to. A question from a former teacher who was scared all the time by the results of the national testing of their students and the possibility they wouldn’t succeed is: aren’t you afraid that they will miss something important by learning this way? Moreover, modern technology provides us with a huge amount of information which is easy to get lost in. How can people in self-organized learning environments cope with these challenges?

Learners must be prepared for national tests as long as those tests continue. One way to do this is to give them a test and ask them to answer in groups using the Internet within the time allotted. Do this for a few tests, then give some more tests. This time the learners have to answer using the Internet but by themselves. Do this for a few tests. Now ask the learners what they would have to do if they had to answer a test but without the Internet and without talking to each other. Then move to the traditional method!

“My work shows that even very small children are able to find answers through the Internet to really complex questions. But there is a difference between a question and a problem: questions have answers and problems have solutions. The Internet has answers, but it doesn’t necessarily have solutions to specific problems. In order to solve a problem, we need the human ability to join the answers to many different questions together and then use that for the specific problem. That way of working is really what companies should look for.”

He is a Professor Emeritus at the National Institute of Information Technology University in Rajasthan, India, and a former Professor of Educational Technology at Newcastle University in the United Kingdom (retired in 2019). He has a Ph.D. in Physics and is credited with more than 25 inventions in the area of cognitive science and education technology. In 2012 he won the Leonardo European Corporate Learning Award in the “Crossing Borders” category. One year later, he won the 2013 TED Prize with his talk entitled “Build a School in the Cloud”. 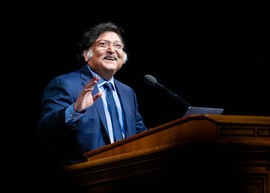